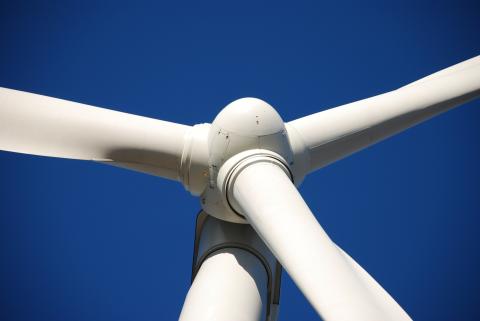 We have delivered a statistical report for an offshore wind farm in Scandinavia regarding which weeks/months would have the largest uptime for blade repair operations.
Below article will run through the report and reveal some of the findings. Enjoy reading!

A statistical analysis of the wind speed, relative humidity, temperature, and lightning risk was made to investigate the combined uptime.
This was done for the period April to September between 05:00 and 18:00 UTC and presented as weekly averages.

The uptime was defined as weather windows of minimum 6 hours and was based on the following criteria:

The basis of this analysis was data from the climate reanalysis model ERA5. The climate reanalysis model has data sets for a large number of different parameters and is covering the period from 1950 until present. However, we were using data sets from 2000 to 2020, as it gives sufficient information. If you use 50 or even more years of hindcast data, there is a risk that a slightly different climate 20-50 years ago will distort the calculations for the expected future.
The ERA5 data is processed by European Centre for Medium-range Weather Forecasts, ECMWF. This is arguably the best global hindcast model available. Not only because of the trustworthy producer, but also the high resolution with 0.281 degrees for the atmospheric model and 0.36 degrees for the wave model, as well as the availability of one-hour time steps. Even with a model resolution as high as this, there are still some limitations. Therefore, it is a part of our data validation process to analyze if the climate reanalysis model performs good enough over the given area. If abnormalities are found in the data, then a metocean analyze and discussion will tell what the model issues is in the area and what the expected results would be.

Regarding the parameters, the lightning risk are the parameter with highest uncertainty, as there is no single meteorological parameter to describe this risk. Instead an index is used, called K Index, which is a combination of temperature and dew point temperature at higher altitude. This gives an indication of the instability and likelihood of showers and thunderstorms at the location.

This parameter has a few disadvantages; it does not capture inversions, wind shear, CAPE, instabilities below 850hPa caused by strong maritime heating and as the formula only check the moist at a specific level, it may not always be perfectly representative for the atmospheres moisture availability.
Furthermore, a threshold must be defined. After careful consideration and investigation, it was set to 250C. This was found to theoretically correspond to a nil or low risk of thunderstorms. It is partly based on other lightning statistics (high risk) in combination with our internal experience and statistics of forecasted medium and high risk.

Winds:
It was found that the wind speed through the period April to September are relatively evenly distributed, with only a smaller increase during the last few weeks. The average speed is below the criterion, but there are of course periods where the wind speed is above criterion.

Humidity:
While analyzing the relative humidity it was found that the first weeks has lower average values than the last ones, see figure 1. It can also be seen that from about week 30-31, the relative humidity on average are close to the criterion at 80%. This pattern is also seen for the minimum values for the relative humidity - it is not as low as it is in the first weeks. This gives the indication that it most likely will be limiting regarding the uptime for this period.
In general, the average is close to the criterion in the whole period. It is therefore likely to cause downtime rather often.
The data has been compared with humidity observations from a met station in the area, which was in good agreement and just very slightly lower in general.

Temperature:
The temperature of a OWF will be highly affected by the water temperature, this is seen by a slowly rise during the spring (see figure 2). In the figure, even the maximum temperature does not increase to above the 10°C criterion the first week and are very close the first couple of weeks. This is clearly indicating that the uptime will be very low for these weeks.
The opposite appears in week 26-38, where the minimum temperatures are found above the criterion and means that there is a clear uptime period regarding temperature.

Lightning risk:
The K Index parameter was used to represents the medium to high risk of lightning. It is found to be lowest during the first weeks, then the risk is increasing and will be peaking during the summer weeks and will then be decreasing again during the last weeks, which is also expected.
During the latest weeks in the period, the average again decreases, which is also as expected for late summer and early autumn.

In table 1 the separate uptime for every parameter based on 1-hour work window presented as average per week are displayed. The wind speed is above 90% except for the five last weeks, where it still is above 84%. Statistically there is only a few occasions where the wind speed criterion of 10m/s is causing downtime.
The relative humidity on the other hand are more likely to cause downtime, as the uptime is ranging between 50-80%. Week 14 to 29, the likeliness for uptime are above 60%, while it thereafter is between 50-60%.
The temperature is statistically very likely to cause downtime the first 5 weeks, and rather likely until week 22. Thereafter, it rapidly becomes very unlikely to cause trouble, as the analysis show (near) 100% for most of the remaining weeks.
The medium to high risk of lightning represented by the K Index, indicate a lower likeliness in the beginning - below 7% downtime for the first 5 weeks. The K Index does partly correlate with the temperature increase. This means that the statistically warmest weeks 27-33 are the most likely to cause the longer downtime in the regards of high to medium lightning risk – the uptime are here between 57-67%. Already from week 24 the values have dropped down below 80%. The last few weeks the likelihood for medium to high lightning risk again decreases and is thereby increasing uptime.

In table 2, a 1 hour (1h) and a 6 hour (6h) combined uptime are presented. The pattern is the same for these to different lengths of windows, just with smaller percentage value for the 6h window. The following will regard the 6h window, as this is the requested window for this analysis.
The temperature has already been mentioned to limit the uptime until week 22. This is also seen here with nearly zero uptime the first five weeks and then still below 10% another 2 weeks. First at week 21 the uptime reaches 21%. Then it rapidly increases and the following weeks, 22-26, are the ones with the highest uptime, 42-50%. Then the uptime decreases, which correlates with increasing relative humidity and K Index, reaching its lowest during week 30-32 at 27-30%. After week 33 the combined uptime is on average about 31-38%.

For this specific offshore wind farm, we concluded the following:

For all periods, the relative humidity is expected to be highest during the morning, so more workable hours are found during the afternoon.
Keep in mind that it is not likely that all weeks are behaving as the average. The atmosphere (and therefore the weather) is a dynamic system, and it is likely with shifting conditions within these periods, both going above and below average.

We hope you now can see the benefit of a statistical metocean report - we just love to crunch a lot of data and then turn it into valuable information for our clients!