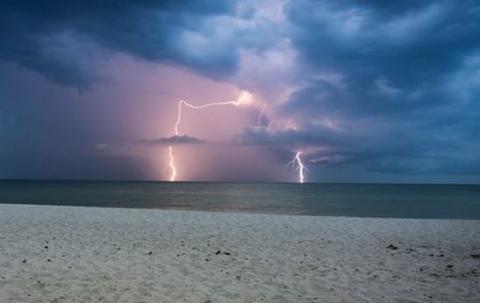 Summary
Everything you need to know to understand this powerful phenomenon.

Thunderstorms can have a large impact on offshore operations. It is therefore vital to understand the different factors that affect the development and movement of thunderstorms and have knowledge about how different synoptic weather situations affect the risk of lightning. In this article we run through these topics:

The basics of the formation of thunderstorms

There are three main ingredients in the formation of thunderstorms: Moisture, instability and lifting mechanisms.
The vertical temperature distribution in the atmosphere can be divided into two main types: Stable and unstable air.

Although an airmass is unstable, it often needs a lifting mechanism in order for showers and thunderstorms to form. In summertime, the rising surface temperature is the most common lifting mechanism. However, front zones, terrain and the advection of warmer air could for example also trigger a lifting motion of the air.
Normally during the summer, there is a temperature difference between land and sea, and the thunderstorms will weaken when moving out over the colder sea. However, depending on the speed of the showers and how large the temperature difference is between land and sea, the thunderstorms can still have an impact on offshore sites.
Read our article for more about the different lightning seasons at sea.

The movement of thunderstorms

The wind speed in a height of around 10.000ft (around 3.0km), is often a good indicator of both the direction and the speed of isolated showers and thunderstorms.
The best way to measure the speed of fronts with embedded thunderstorms, is to look at weather radar images or satellite images and compare the location of the front at two different times and then calculate the speed based on the distance and time.

The clouds associated with a building thunderstorm

Read this article if you want to know how to differentiate between dark thunderstorms and dark stratocumulus clouds. By learning some simple rules of thumb, you can sometimes continue working offshore although the clouds are looking threatening.

As there will be a net flux of radiation outwards during the nighttime, the temperature in clouds will fall in the top of the clouds. This will cause more unstable conditions, especially during the hours around sunset. It is therefore not uncommon to see lightning during the late night and early morning, and then no lightning detected a few hours after sunset.

Weather radar data and satellite images are vital in order to monitor thunderstorm formation, development and movement. If an offshore location is far from the coast, there could be problems with both the radar coverage and that heavy showers could be displayed with the same intensity as light or moderate showers closer to the radar location.
It is therefore important to use satellite images as an additional tool. However, it is easiest to spot potential thunderstorms on a visual satellite image which could cause problems during the winter months when the sun is rising late and setting early. In that situation, satellite images that displays the cloud top temperature can be used. A cold cloud top temperature could indicate a large vertical extent of the cloud and hence risk of thunderstorms. Read our article for more about how to use satellite images.

Difference between showers and normal rain

The risk of thunderstorms and lightning in different types of weather

Below we have stated the general risk of thunderstorms in different weather systems and air masses. The examples are “schoolbook” examples, but there will always be different factors that will change the risk for any given situation.