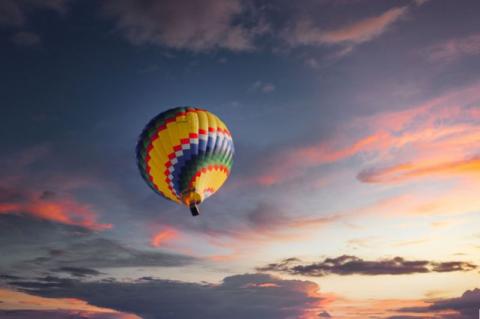 Summary
A very simple explanation of how wind occurs

Are you in need of an explanation of why the wind blows?
Instead of the academic meteorological style with high and low pressure, warm and cold advection, Coriolis force, friction, terrain differences etc., we have chosen to write this text as illustrative as possible, so that anyone can follow - perhaps even children.

The wind as a hot air balloon

This story begins on a sunny day at the Equator where you feel the warmth in your face from the sun. This is the beginning of the short story of the wind - not that you feel the warmth in your face, but that the air all around you gets heated. When air is heated it rises - just like a hot air balloon. The sun is working as the fire in the hot air balloon, which causes it to rise up in the sky. The main difference is that the air is not visible, as the big colorful hot air balloons, and that the size of the air "blobs" is relatively lighter, so that the heat of the sun can make them rise and no fire is needed.

Now that we found these similarities of the air and the hot air balloon, why not use it? As said, this story begins at the Equator, for the very specific reason that this region is the location on Earth where the Sun has most power.
We will now start our journey from the Equator in our hot air balloon, representing the air movement.
It is not only you and your hot air balloon, but lot of colorful balloons are standing on the ground all tanked up and ready to get going. One after the other they rise into the sky.
When we are high above the Equator you see balloons in red, blue, green, yellow and so on, but don't you think they are a bit too many? "Swoop", oh that red balloon almost crashed into your balloon, it is really getting all too crowded (this is basically high pressure). We better steer towards the poles where there is less crowded (low pressure), so we don't crash for real.

As we go towards the pole, the hot air balloon captain announces we are low on fuel. We are going to do an emergency landing in the subtropics. The captain is very routinized so no worries - she will take us down safely. Back at the ground we realize that a lot of the other hot air balloons seem to have the same issue. Again, we feel as it is too crowded. Seen here from ground, the Equator seems to be less crowded.
We can't leave the balloon, but luckily, we are enough passengers to carry it along. So here we run with the balloon at our back. Wait a bit - so now the balloons are dragged over ground? Is this beginning to be a bit to the far side?
Wait, the balloons were representing air - this is the wind blowing over the ground that you almost daily feel when being outside.

The circle of the air, rising from the Equator travelling toward the poles and then back, are closed and is actual the simple version of the trade winds. However, this is not all true. A lot more is happening on the way so that the air doesn't travel in this prefect circle - but it would if the Earth had a prefect smooth surface and didn't rotate.
So, this is the basic concept of how the wind starts moving, just that other forces are added along the way.

Time to dig a bit deeper and explain some of these disturbing forces that makes the wind move in somewhat other directions. Let's introduce the rotation of Earth that we call the Coriolis force. For this one, imagine yourself being at an amusement park on a traditional carousel that just goes around and around.

If you would draw a line on the floor of the carousel, from the middle and straight out, and then when the carousel starts spinning, were walking from the middle and straight out. You would then not end up walking on that line you just drew. Instead you would end left or right of it - depending on the direction the carousel is turning. This means, that when you were running from the subtropics, with the hot air balloon, towards the Equator you actually didn't end up where you started. This kind of force is also part of the reason for why the winds turn in certain directions around high and low pressures - clockwise around a high and counterclockwise around a low on the Northern Hemisphere - and vice versa on the Southern Hemisphere.

To fully explain the general pattern of the wind systems on Earth, we would need more time, but the above text contains the basic of the general movement of wind. We have left out interesting topics as the doldrums, the Ferrel-, Hadley- and polar cells, the polar- and subtropical jet stream etc.
Still this is not all as we as well have regional and local differences, caused by differences in terrain (and also the effect of friction, vertical stratification and thermal gradients at the surface as well as the flow patterns associated with convective clouds). One of these local wind phenomena is the sea breeze and another one is katabatic winds like the Mistral wind.
Mountains or hills is one of the important differences in terrain. You know that when you walk up hill it is hard, while going downward, when the hill is steep enough, almost make you begin to run. The wind has it the same way - it moves slower upwards, but faster downwards. The only difference is at the top where you take a break to catch your breath, that's where the wind most often is strongest!