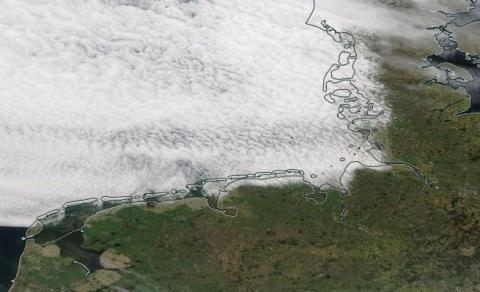 The two main things are: friction and heat capacity.
In this article we describe the main differences, the effects of these differences and describe some phenomena that are connected to either sea or land.

When an airmass is passing over a large body of water, it will collect some moisture. The opposite is true when it passes over a large landmass, the air will instead gradually become drier (read more here about air masses). A flow of warm air (which can contain more moisture) with a long fetch over sea, will therefore typically bring more clouds and increased risk of misty conditions.

On sunny spring and summer days, the increasing temperatures over land can cause a sea breeze circulation. The sea breeze can trigger thunderstorms over land if the atmosphere is unstable and there is enough moisture. These thunderstorms will never affect offshore wind farms, as the wind is blowing onshore.
The standard schoolbook example of a sea breeze will cause increasing winds directly towards the coast. However, depending on the shape of the land mass, the presence of other land masses nearby and the direction of the general winds due to synoptic pressure forces (and also the effect of friction, vertical stratification, thermal gradients at the surface and terrain slopes as well as the flow patterns associated with convective clouds), the sea breeze can have a none perpendicular angle to the coastline. This is due to the fact that the biggest land mass, with the potential highest temperatures over a large area, will dominate the sea breeze effect.
Read this article here for more about the phenomenon.

Tropical cyclones can only form over water, as they need huge amounts of moisture captured in warm air to develop. As soon as a tropical cyclone makes landfall, it will start to fill and weaken. However, if the tropical cyclone reenters the ocean it may intensify again.
For more on the formation of tropical hurricanes and typhoons read this article.

Thunderstorms needs a trigger in order to fully develop into a thunderstorm.
The surface temperature is often this trigger. You can therefore see a difference in shower/thunderstorm activity between land and sea if there is a large temperature difference.
Thunderstorms are typically more difficult to forecast over sea than over land, due to:
- General poorer radar coverage (weather radars are located on land).
- More surface observations on land, and therefore easier to predict where and when showers can develop into thunderstorms.
- Thunderstorms behave more "unpredictable" over sea. This is due to the moisture, and possible higher dew points, that is difficult to forecast, but probably also due the more homogeneous surface in comparison with the more inhomogeneous terrain over land.
Read more in this article about thunderstorms.

It is much more common with snow over land than over sea, due to the often relatively warm sea temperatures in the Northwestern Europe. However, when there is a strong N-ly flow of really cold arctic air, heavy snow showers may form over sea and the windward coastline. This is due to the combination of relatively warm and moist surface and very cold air aloft, causing instability that will generate showers. When the snow showers are moving further inland, they typically will cease due to the low land temperatures.

Fog is probably the weather parameter, with the largest difference between land and sea. Fog will typically develop in weak winds and when there is a little difference between the temperature and the dew point temperature (the temperature at which the air becomes saturated with water vapor). Over land, fog can form during night if the winds are weak and the sky is clear. This is due to big net flux of radiation outwards to space, which can cool down the land surface to around the dew point and fog can then form. This is not possible over sea, due to the small variations in temperatures due to the much higher heat capacity of water.
On the other hand, fog over sea will typically be present for a longer time compared to land as the sea temperature do not have a diurnal variation.
Read more in this article about visibility reducing phenomena like fog and mist in this article.

In a uniform flow, the wind speed will always be higher over sea compared to land due to the friction. How large a difference, depends on the type of terrain. A lowland with few vertical obstacles, will have much less friction compared to a hilly terrain with forest. Generally, the weather models are performing better over sea than over land. This is due to the more uniform sea surface, compared to the land surface where both roughness and heat capacity can change over small distances.

Stable air: The vertical temperature is increasing with height and there will be limited vertical movement as the colder air is heavier than the warmer air above.

Unstable air: The opposite is true and there is a large vertical movement as the warm and lighter air will rise (the process that is called convection).

The strength of the wind is usually increasing with height, as the friction will have less influence on the flow. In an unstable airmass (gusty winds and often showers), the influence of the friction will extend to a higher altitude compared to a stable airmass, due to the larger vertical movement of the air. In stable conditions a wind maximum can sometimes develop around the top of the stable layer - for example when warm air is advected over an area with colder air.
Over land there is also a very special kind of low level jet, the nocturnal jet. During a clear night, there will be cooling of the land surface and hence there will be a temperature inversion (temperature increasing with height). The height of this inversion layer will increase during the night and when it gets high enough, the air at the top of the inversion layer will be decoupled from the surface and hence not be affected by the surface friction. This will result in accelerating winds, and a wind maximum will appear at the top of the inversion – this is the low level jet.

Typically, the strongest nocturnal jets are located at a height of around 1000m, but at weaker wind levels they can also appear down to a height of 100-200m. Although the nocturnal jets are a land phenomenon, they can affect offshore wind farms if they are located relatively close to shore and the wind direction is offshore. The wind speed will rarely exceed 10m/s in connection with low level jets at low altitudes around the height of a wind turbine, but the weather models will most likely not predict this wind maximum. If making high lifting operations at a harbor during the night or early morning, a nocturnal jet could also affect the operation with higher wind speeds than the weather models are predicting.