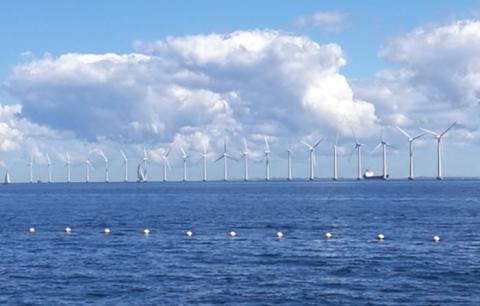 Summary
The sea breeze is a classic spring phenomenon.

It originates from the cold sea after the cooling winter and is due to the temperature difference between the warm spring air and the cold sea water.
In the coastal areas, especially in the spring months, this can create a fresh onshore wind in the daytime and an offshore wind in the nighttime.

The sea breeze forms when the sun warms the land area so much that the surface air pressure drops.
As the heating is not nearly as efficient over the cold sea, the air pressure does not change here. The difference in the air pressure therefore causes the air to move from the sea towards the coast – this wind is called a sea breeze.

The best conditions for the occurrence of sea breeze are cloudless weather, generally weak wind conditions and a cold sea.
These conditions are met by a high pressure in spring, which may have weak winds in the morning hours. But once the sun has warmed the air over land, the sea breeze will be established.
This wind is cold due to the cool sea surface temperature and as the cold air enters the warm land, the air is heated from below. This will cause a rising air flow and cumulus clouds can be formed.
The sea breeze can be established along several coasts at the same time over islands and peninsulas - as long as the distance from coast to coast is less than 300-400km.
Take for example the Danish peninsula Jutland. East Jutland may have easterly winds, while West Jutland has westerly winds at the same time. The two sea breezes can move slowly inland during the daytime and in special cases can meet over the Jutland Ridge.

In addition, the sea breeze can move mist and fog from sea to a coastal region – in Danish we call this “havgus”.
Fog over the sea is also a spring and early summer phenomenon because the cold sea can cool the air to the dew point where fog is formed.
It is not uncommon for a sunny spring morning in the coastal areas to turn into a cold, humid and grey foggy day in the afternoon due to the sea breeze – just ask the San Franciscans!
If you want to read more about visibility reducing phenomena you can read this article.

The summer and winter monsoons are in fact large sea and land breezes that have an annual variation instead of a 24-hour variation.
The most known monsoon is the one in India and is normally defined as seasonal changes in precipitation and the atmospheric circulation (with seasonal reversing winds) associated with the asymmetric heating of land (Asia) and sea (Indian Ocean).
The transition phases between the two monsoon regimes is in April/May and October/November.
When the summer monsoon is culminating in July, winds will reach gale force and the waves can easily rise to 4-5m (significant wave height) in the Arabian Sea – this is rather annoying for the mariners sailing between Southeast Asia and the Red Sea.

The sea breeze is a thermal circulation showing a diurnal cycle in the local scale in coastal areas.
The air over the land is heated faster, and gains altitude, while the air over the sea moves inland forming a narrow cold front. The air over the land, that gained altitude, travels hundreds of kilometres offshore (up to 200-300 km), where subsidence occurs, closing the thermal cycle. The sea breeze layer thickness ranges from 50 m (at dawn) to 300–400 m.
The sea breeze is usually weaker than the general synoptic winds but features a larger periodicity and a higher predictability. At night, a reversed thermal circulation appears (the land breeze which usually is less intense).

Can a sea breeze affect an offshore wind farm

Yes, it can, as the phenomenon can work against the general synoptic winds and thus cause a lower energy production during peak energy demand periods (afternoon and early evening). The reversed land breeze in the nighttime will intensify the winds but that is after peak energy demand.
In some occasions the sea breeze can of course also intensify the winds during daytime depending on the wind direction and the location of the offshore wind farm in relation to the coast.
If you want to read more about changing winds you can read this article.
The below images of two forecast charts show an example of a sea breeze working against the general synoptic winds. You have to use weather model of a rather high-resolution to catch the details of a sea breeze.

A study at Rutgers University